Ono is probably is not a music label. It is pronounced "Ono" with a Rossendale accent.

Ono has been running since early 2007 to release music from the north west of england in a conscious DIY style.

Ono means 'delicious''scrumptious' or even 'Sweet' in Hawaiian. In Hawaii it refers to a fish which is a delicacy in those parts. It is also called a Wahoo. It is very similar to a snapper but is much dryer and firmer.

Ono also means "Or Nearest Offer"
Ono is also a Spanish cable company
The Japanese meaning for Ono is an axe. In Japan Ono (小野) also means 'Small Field' or Ōno (大野) means 'Large Field'.
Ono is also the surname of Yoko Ono a Japanese lady who married the Beatle John Lennon. Yoko was a member of the Fluxus art movement.
Ono-i-Lau is a volcanic and coral island island Fiji's Lau Archipelago.

Diskono is a label from Scotland that i really love... naming the website after this is a nod to that label.

Diskomo is a song by the Residents.

The photos below are images from press sheets , reviews and historical ono documents . The photo, taken inside baked goods office with Simon Tonkinson (out of focus) is the place where Ono was first conceived and then distributed into the world ! Simon was instrumental in this so thankyou Simon ! 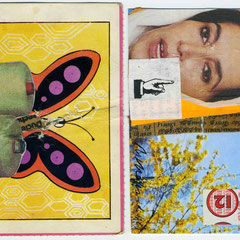 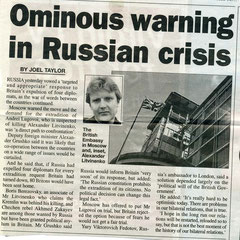 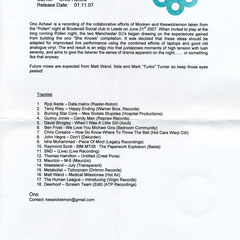 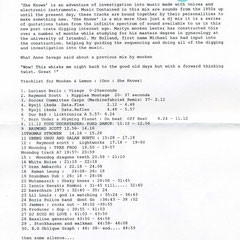 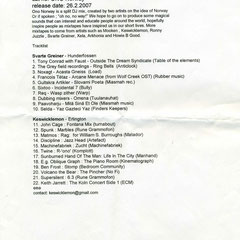 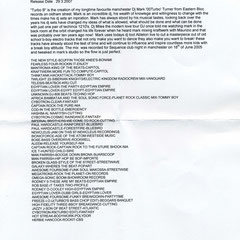 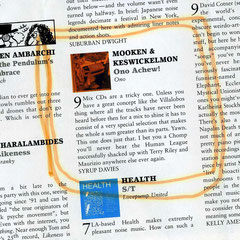 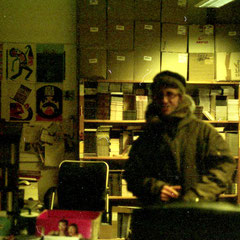 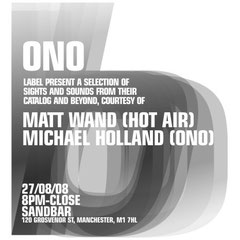 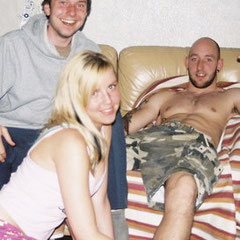 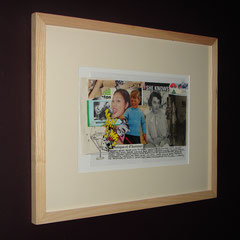 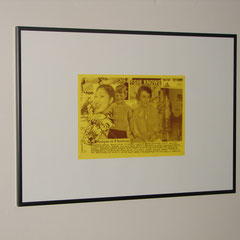 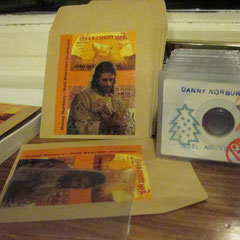 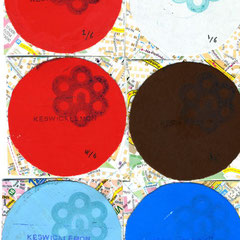 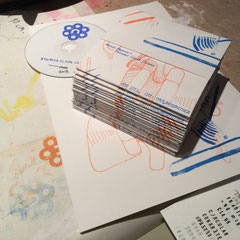 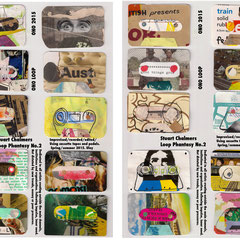 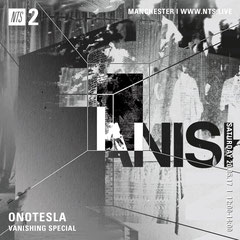 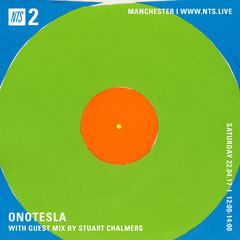 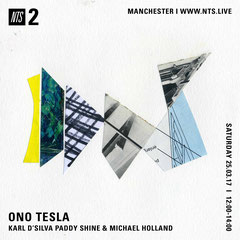 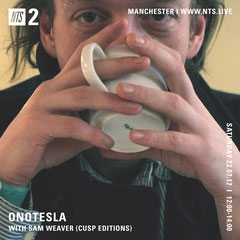 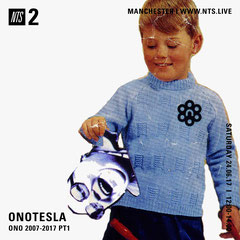 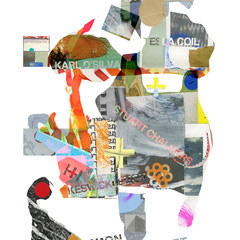 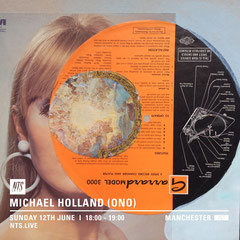 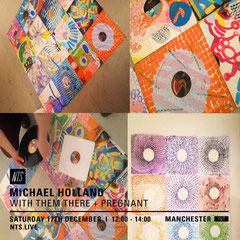 Recently i've done a radio show on NTS and i played a great deal of forthcoming Ono releases and many other bits and pieces.

I Started Ono as a small project i could call my own at a time in my life when i needed a bit of creative space for myself. i ran a small night called "Licktronica" with my friend Robert Bailey and he was totally in control of the graphic design putting together amazing looking posters and flyers each month. Together we put on a lot of good gigs and visually the night had a strong identity. There are some flyers and posters still available from Rob's shop , i think that they still look great after quite a few years!

Rob Bailey also Designed the logo you see on the lads jumper to the left of this text, i still use it on my CD's now.

I'm trying to give an idea of why this small project exists! it came out of a time at baked goods distribution when i was sending out hundreds of records a day in parcels , around the world, using clear parcel tape to capture small collages in the side of the boxes i was wrapping up. These boxes would often get sent to japan to P*dis in Japan or Kompakt or Hardwax in Germany. Sometimes i'd get a reply sometimes not. There is no photographic evidence and no remaining artwork to show for this time of experimentation and throwaway creations. You will just have to take my word for it that it happened.

A lot of good music was passing through my fingers, test pressings, Cdr's and vinyl being passed around for test-driving. Boomkat was downstairs and there was a good vibe in the air with John Twells often passing me the new releases on Cdr (Mp3) illegal obviously but sharing music was happening daily , with new discoveries being shared in the office over the very good sound system that Howie had set up to try out test pressings!  I remember Gavin starting work at baked and he was one of the most knowledgable people always sharing music he was into, Jandek and hundreds of other albums came from his vast library of knowledge of sound. Ono was born out of this desire to share sounds , Ono releases are often in low numbers , i always regret doing represses for some reason. The desire to move forwards and push onto the next discovery is still very much a part of the Ono aesthetic.

One of the members of Watch Repair put his thoughts to me in a text message recently and i felt this message perfectly captured the feeling of why i should continue this project. When i was confused after a bit of a irritating few days thinking about commerce and people clamouring for attention.

"Whatever happens happens, and keep doing what you do. Ono is not a label, more a way of doing thing. Keep it simple and keep it fun. Its art, not commerce."

Its Art , Not Commerce is exactly the idea i want to encourage in continuing with Ono. I like these small artefacts capturing a moment of music making, Capturing the feeling of the time. That is the most important thing about Ono. I saw a load of recordings made around the 1970's & 1980's of Dieter Roth collaborating and experimenting with a music that was almost intentionally difficult to listen to. i don't intend Ono to be difficult to listen to, but the same idea of documenting these moments in time is very important to me.

I have to say there is one silent partner in Ono that i don't think i'd have been able to do without. Andrew Hargreaves has been helping Ono along since the very beginning. Always supporting my shoddy organisation with his reliable encouragement and helping with manufacturing! Moving forwards with the next thing is always the best way to do things in this time of pointless reissues we need to be documenting the precious moments that are happening now.

Ono is still small and quite insignificant on the grand scale of things but its my small project to create something out of the huge amount of music that passes by my ears over the last years. Its also led me to collaborate with Tesla Tapes on a small Vinyl label imaginitively named OnoTesla … we hope to release a few more records sooner or later when the time is right.

Ono has become a vehicle for me to release music by people i enjoy interacting with. Watch Repair, Danny Norbury, Andrew Hargreaves, Steve Lyon are just a few of the people i still enjoy music sessions with , if its listening or investigating or sharing and making. I'm working with a few new people including Preston is my Paris Robert Parkinson who designed the last Ono release by Uiutna and also helped a great deal with the Stress Waves tape as well as being my teammate in doing the Teasers Pleasers night at soup kitchen each month. Moving on forwards with new releases all the time with more coming up from Leigh's Steve Lyon and Watch Repair are also brewing some treasures up. Tom Boogizm has a superb tape coming out very soon !